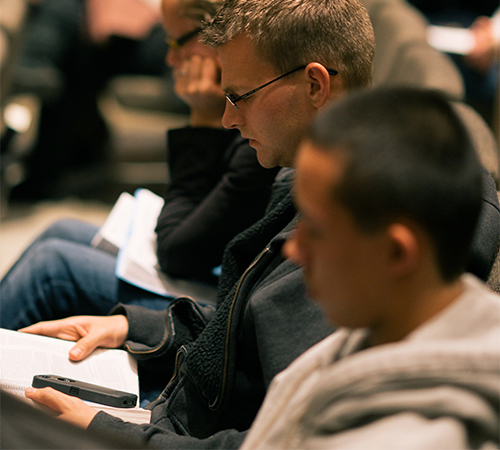 Consistent with New Testament patterns, Church of the Living Word is led through a team of elders who, with Christlike character, watch over the congregation. They guide with the same standard laid out by Paul in 1 Peter 5:1–3:

“…Therefore, I exhort the elders among you, as your fellow elder… shepherd the flock of God among you, exercising oversight not under compulsion, but voluntarily, according to the will of God… nor yet as lording it over those allotted to your charge, but proving to be examples to the flock.”

The eldership team provides an example to the church through brotherly love and devotion to one another and the church. They have proven to be faithful in handling the Word of God, teaching it not as doctrine but as the Word written on the heart.

The elders recognize that the greatest calling of their spiritual office is to create a platform for Ephesians 4:11–16 to be realized in this day:

“… the equipping of the saints for the work of service, to the building up of the body of Christ; until we all attain to the unity of faith, and of the knowledge of the Son of God, to a mature man, to the measure of the stature which belongs to the fullness of Christ. As a result, we are no longer to be children…, but speaking the truth in love, we are to grow up in all aspects into Him who is the head, even Christ, from whom the whole body, being fitted and held together by what every joint supplies, according to the proper working of each individual part, causes the growth of the body for the building up of itself in love.”

In simple terms, the elders provide the platform for the congregation to move in love and deference to one another. They empower faithful members to have a voice and participate in the leadership of the church, and to take responsibility for both the character and mission of the church.

It is with the consensus of the Holy Spirit through the members of the congregation that this local church moves into its mission and place within the whole Body of Christ.

John’s salvation experience resulted in a deep love for God’s Word and a desire to be a disciple. The Lord opened doors for John to serve across the country as a pastor and elder. While serving in those capacities, he has worked as a Facility Engineer, which has been very rewarding. John holds a Master of Theological Studies.

Phil graduated from Cal State Fullerton with a degree in Business/Marketing. He currently works in administration for a health care organization. Phil started attending Church of the Living Word during his first year of college. He became interested in the church because of the emphasis on a personal relationship with the Lord and His kingdom coming in this earth. Phil has served in various aspects of ministry in several churches and is currently serving as an elder in Church of the Living Word.

Patty is a wife and mother who has worked in personnel and payroll, as well as being an office manager for a CPA. She is an intercessor and a psalmist and has a deep love for the Word of God. She is currently serving as an elder.

Michael discovered the Lord as a young man and has never let Him go, no matter what. God has gifted him with a wonderful wife and family. He has a B.A. in Facilities Management, with his last position being Manager of Maintenance for Scripps College. He served as an elder for many years and is currently an elder in Church of the Living Word.

Bob’s relationship with this fellowship came about due to an intense desire to know the Lord deeper and to serve Him wholeheartedly in whatever place the Lord would lead him. Since 1974, Bob has faithfully served in several different churches—leading worship, working in finance and accounting, and helping with grounds maintenance. Bob worked for 32 years in transportation for the Department of Defense. He is now retired and serving as an elder in Church of the Living Word.

Valerie met the Lord when she was 16 and has pursued knowing and serving the Lord ever since. Her overwhelming drive is to see the Kingdom of God established in the earth. Her educational background is chemistry and engineering, and she is currently employed in the health care industry. Valerie has served in administration for the church since 1989.

Donna felt the call of God on her life when she was 10 and then went the opposite direction. In college, after a deep period of seeking purpose, she reconnected to the Lord through hearing the teachings of John Stevens. She has been a faithful member of this congregation since 1974. During that time, she has ministered in various areas including worship, publications, and technical support, as well as website development and maintenance. Her children attended the church’s school from preschool through high school. Donna currently oversees technology for the church.

Douglas has been a member of this fellowship for over forty years. He has pastored several churches and served on their boards of directors. He has also served as worship leader in the church and taught in the school. He has a California teaching certificate for grades K–12, as well as a Master of Divinity. Douglas currently functions as the Board’s liaison with the school and serves as the school chaplain.

Rick’s journey with the Lord began when he was 10. While attending university, he was called to the ministry, filled with the Holy Spirit, and began his pursuit of the Lord in earnest. He also met his wife while at school, and together they continued to pursue the Lord. They came into this fellowship after they were married. Rick has served as an elder and has also pastored in several churches. He is currently a Senior Program Manager for a firm that builds schools.

Roberta’s first memory of hearing God speak to her through the Scriptures was in a 3rd grade Vacation Bible study program where an elderly woman read Scriptures while the kids made puppets and played. In that moment, her love for the Word of God began—God’s voice had come alive in the Scriptures. After graduating from college, she read teachings by John Stevens and recognized that same voice of God. She went on to volunteer for nearly 40 years to record and produce audio messages for the Living Word churches. During those years, she also worked full time in various executive positions for an insurance company.

Gary had no experience with church prior to encountering the Lord in the Word spoken by John Stevens. When he heard the Word, the Lord met him, and he knew he was where he belonged. He has been part of this fellowship for many years, during which time he has experienced an ever-expanding relationship with the Lord and deep fellowship with members of the Body. A building engineer by profession, Gary has mentored many in the trade, and has assisted in maintaining church facilities. He currently serves on the Board as facilities manager for the church.

Janie is serving as an officer with the Board, supporting the technology needs of the church. Her career background was as a software designer, and she enjoys making technology “work” for people. Janie loves the Lord and is deeply crying out for His Kingdom to be established on this earth.

Barb has been a member of this fellowship since 1974. Her life has been given to serving the Lord ever since. She has been involved in various aspects of ministry, including administration and finance. Prior to retiring, she worked as a forensic accountant. Barb currently serves as Chief Financial Officer for the Board of Directors.

Tracey has worked as an RN, providing patient care for the last 44 years, retiring in April 2021 from health care. She has a deep love for the living Word and since 1974 has been involved with transcribing it. As secretary for the Board of Directors, she is custodian of the organization’s records. She also is the church business manager.